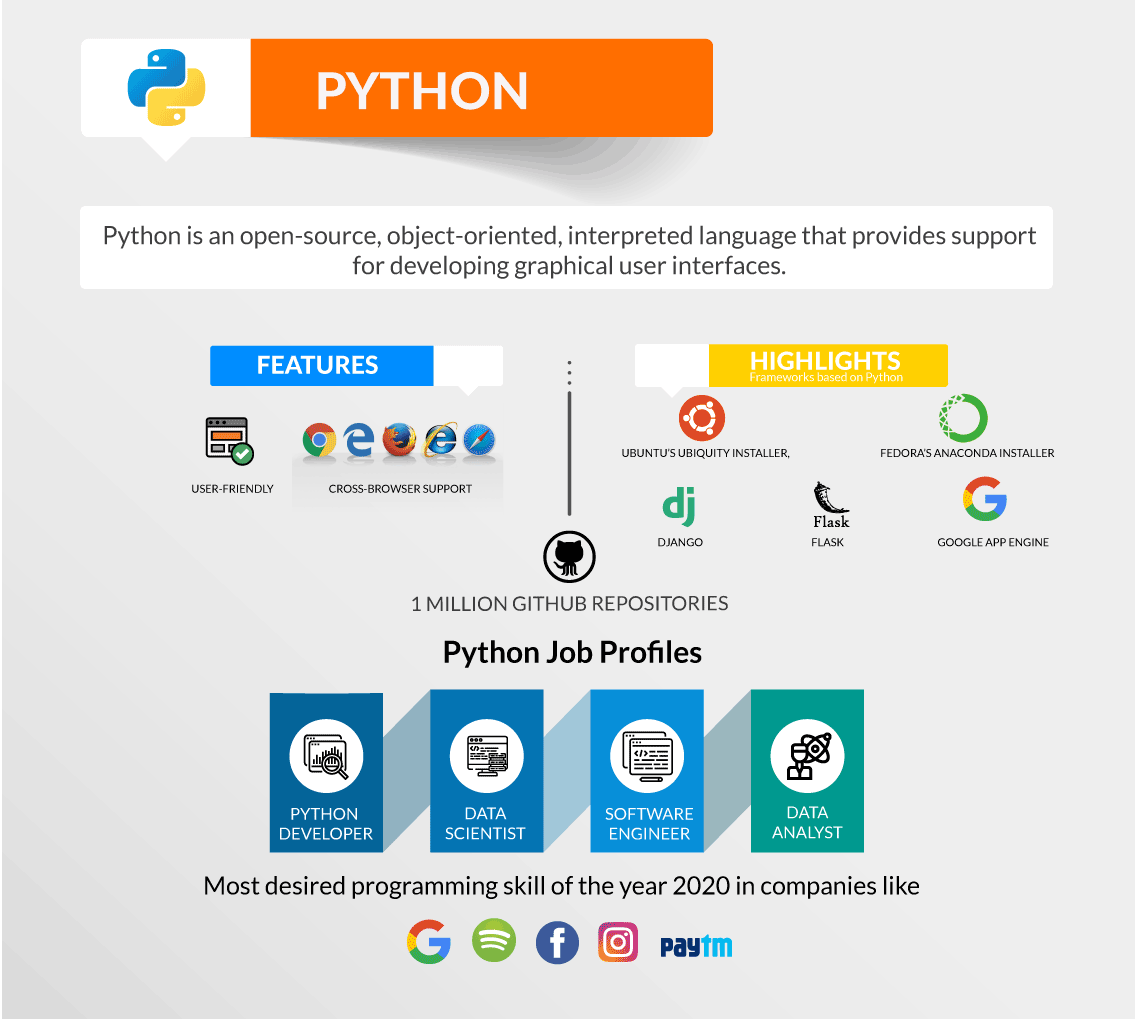 Python continues to be one of the best programming languages every developer should learn this year. The language is easy-to-learn and offers a clean and well-structured code, making it powerful enough to build a decent web application.

Though Python has been around for a while, it makes sense to learn this language in 2020 as it can help you get a job or a freelance project quickly, thereby accelerating your career growth. 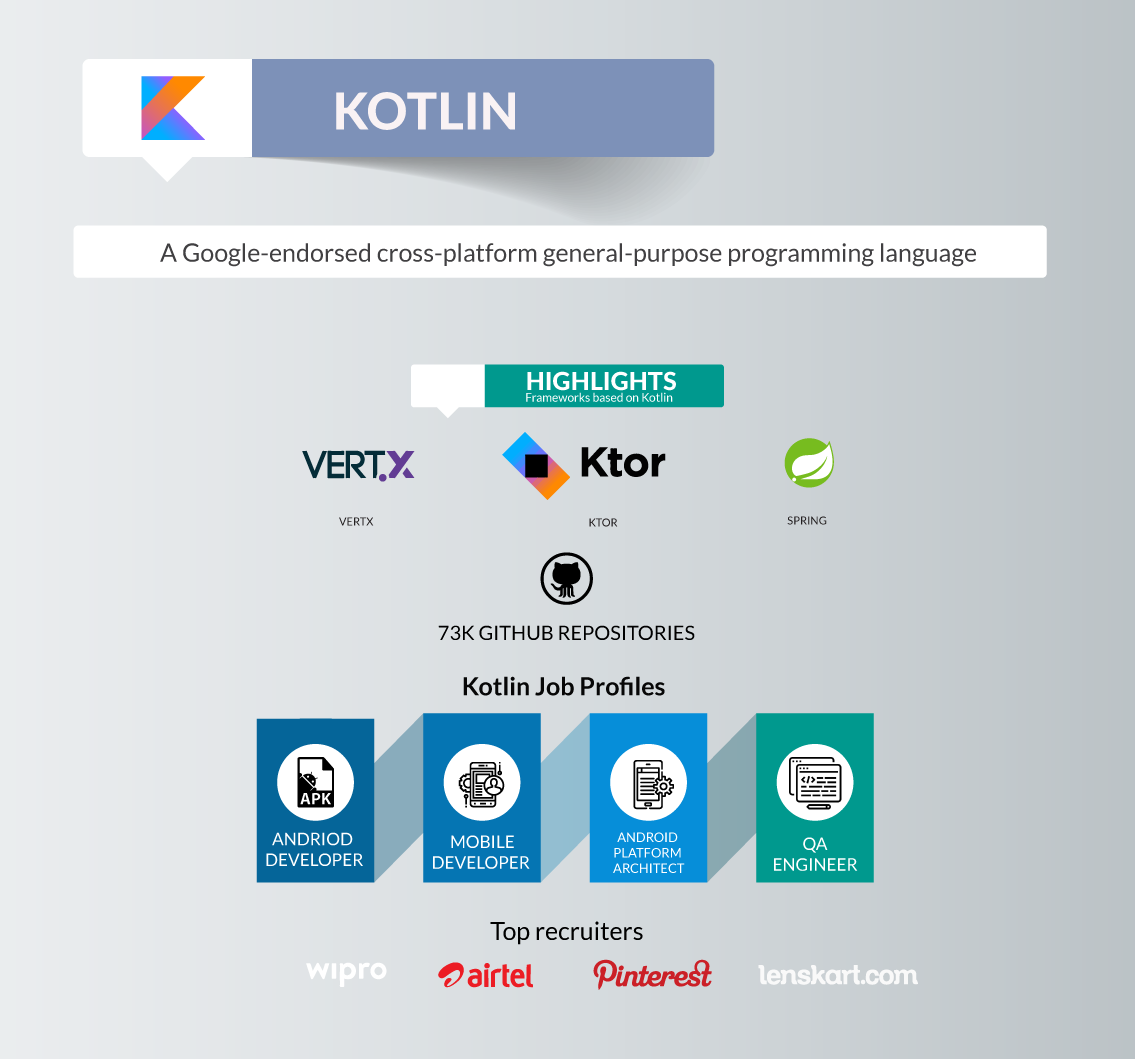 Kotlin is a general-purpose programming language with type inference. It is designed to be completely interoperable with Java. Moreover, from the time Android announced it as its first language, Kotlin offers features that developers ask for. It effortlessly combines object-oriented and functional programming features within it.

The effortless interoperation between Java and Kotlin makes Android development faster and enjoyable. Since Kotlin addresses the major issues surfaced in Java, several Java apps are rewritten in Kotlin. For instance, brands like Coursera and Pinterest have already moved to Kotlin due to strong tooling support.

As most businesses move to Kotlin, Google is bound to promote this language more than Java. Hence, Kotlin has a strong future in the Android app development ecosystem. 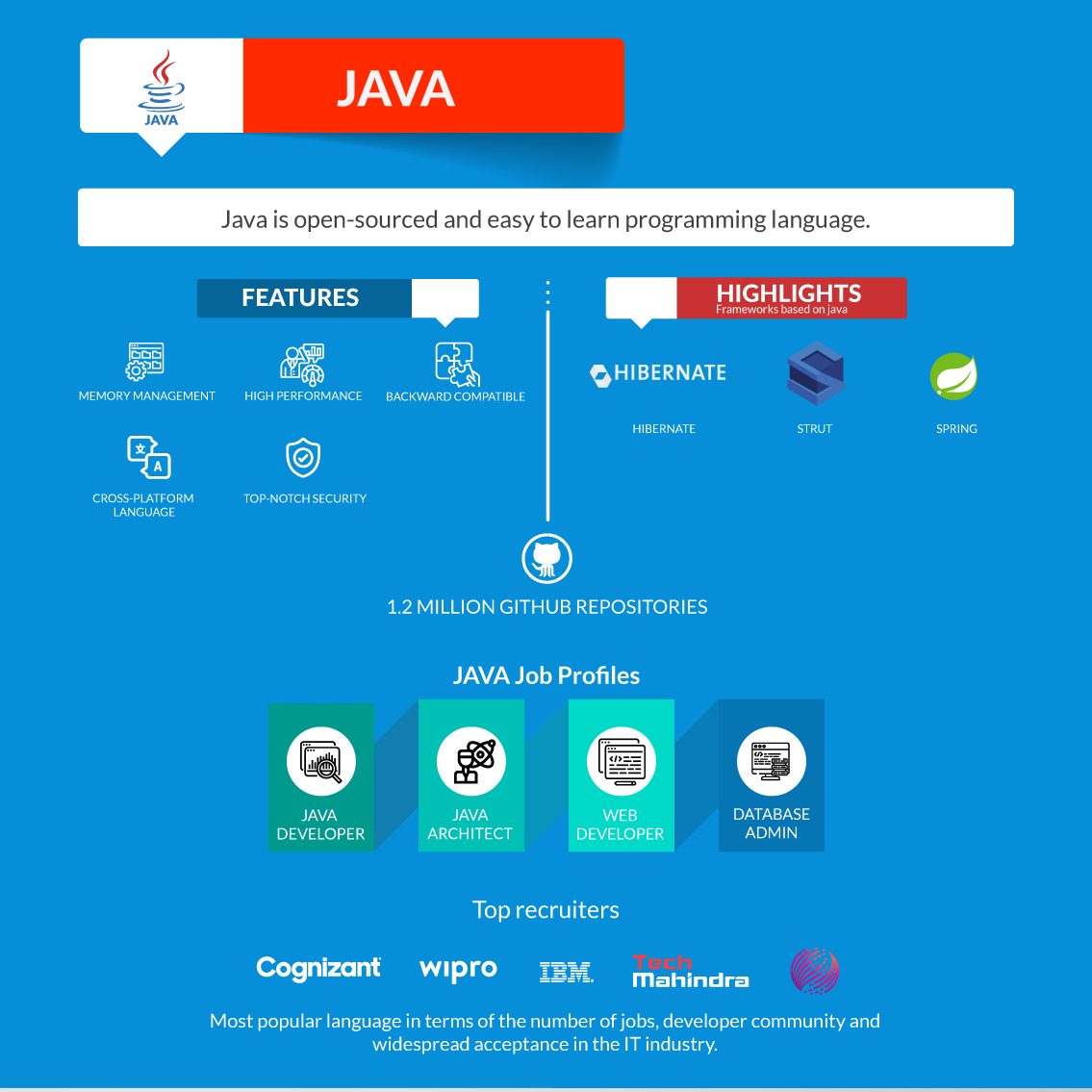 Java is celebrating its 24th birthday this year and has been one of the most popular programming languages used for developing server-side applications. Java is a practical choice for  developing Android apps as it can be used to create highly functional programs and platforms.

This object-oriented programming language does not require a specific hardware infrastructure, is easily manageable, and has a good level of security. Moreover, it is easier to learn Java in comparison to languages such as C and C++. No wonder, nearly 90 percent of Fortune 500 firms rely on Java for their desktop applications and backend development projects.

Despite its industry age, the Java is incredibly stable and not heading for retirement anytime soon. This makes Java one of the most desirable languages among programmers in 2020. 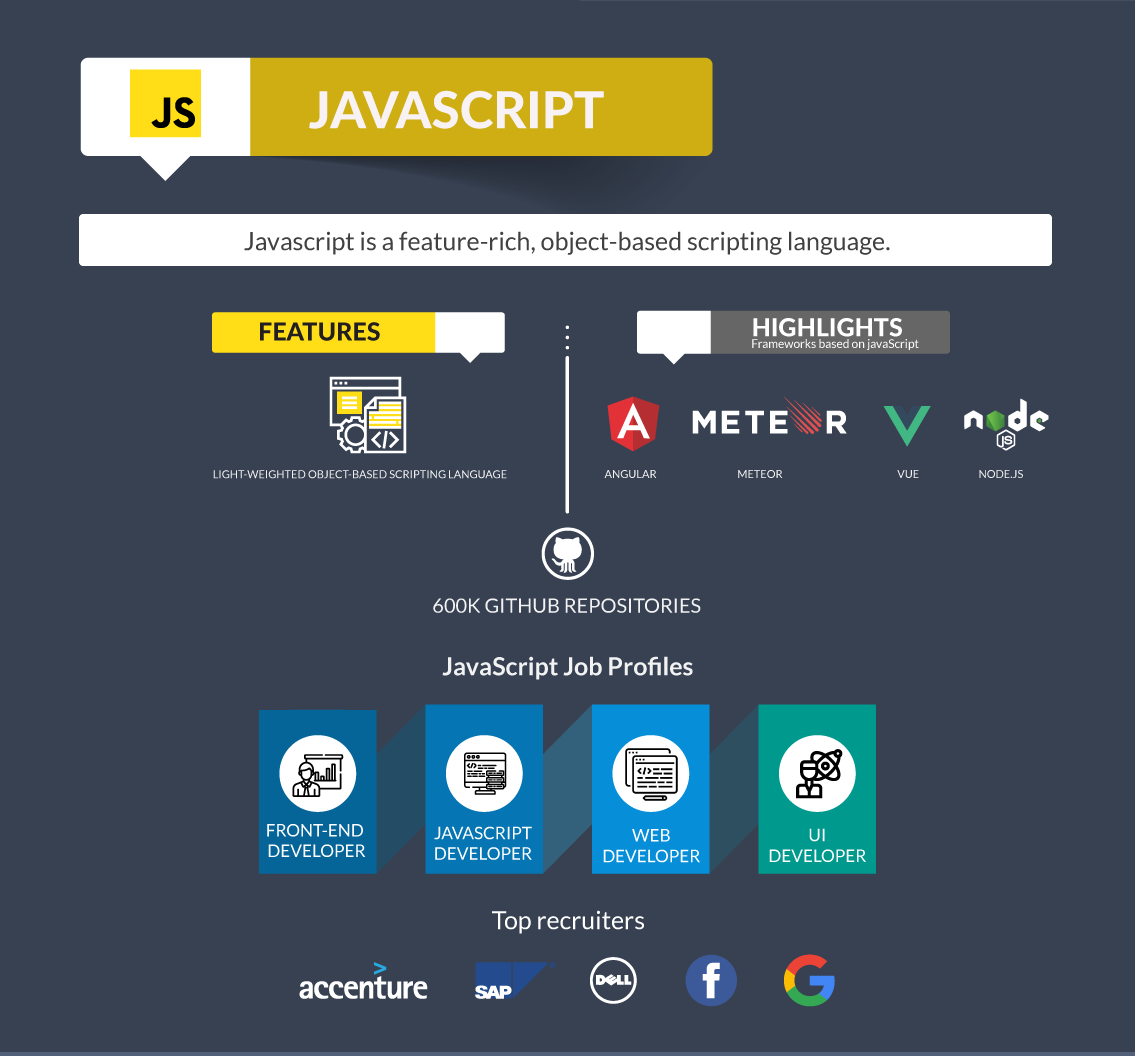 JavaScript (also known as NodeJS) is a popular language among developers who need to work on server-side and client-side programming. It is compatible with several other programming languages, allowing you to create animations, set up buttons, and manage multimedia.

Owing to its high speed and regular annual updates, JavaScript is an ultimate hit in the IT domain. Reputed firms like Netflix, Uber, PayPal, and several startups use JavaScript to create dynamic web pages that are secure and fast. In fact, the 2018 Developer Skills Report by HackerRank shares that JavaScript is the top programming skill required by companies today.

TypeScript, a superset of JavaScript is an object-oriented language that was introduced to extend the capabilities of JS. The language makes it easy for developers to write and maintain codes. TypeScript offers a complete description of each component of the code and can be used for developing large applications with a strict syntax and fewer errors.

Further, it is well-structured and easy to learn. Its extended toolbox makes application development quick. Owing to the benefits it offers, TypeScript is expected to supercede JS in 2020, making it one of the most sought-after programming languages in the future. 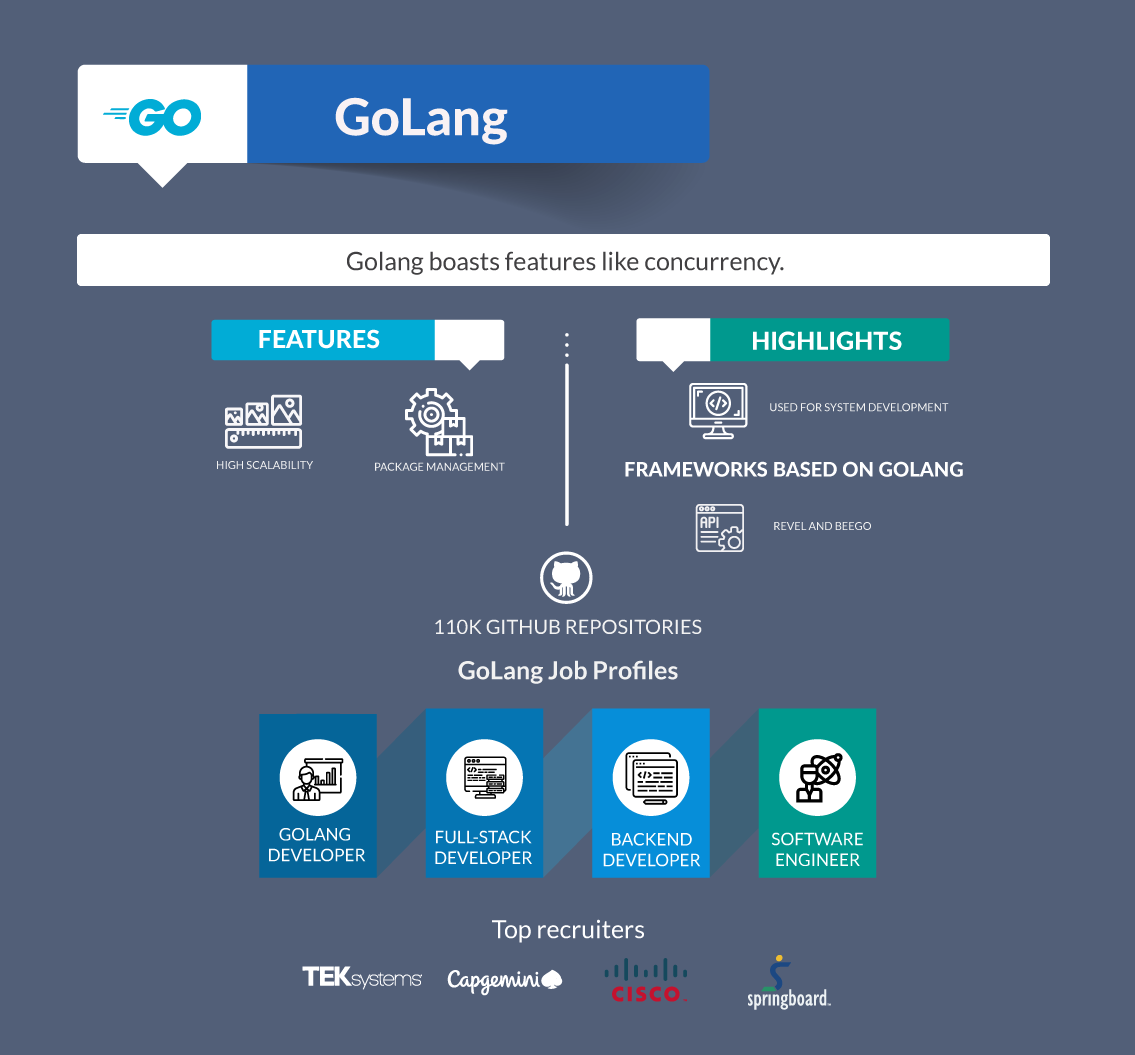 Go is fairly a new system-level programming language that has a focused vocabulary and simple scoping rules. It blends the best aspects of functional programming and object-oriented styles. Go is the fastest-growing language on Github, meant to replace languages like Java and C++.

A Stack Overflow survey reveals that Go is the fifth most preferred language among developers today. This is because, Go solves issues like slow compilation and execution in large distributed software systems. 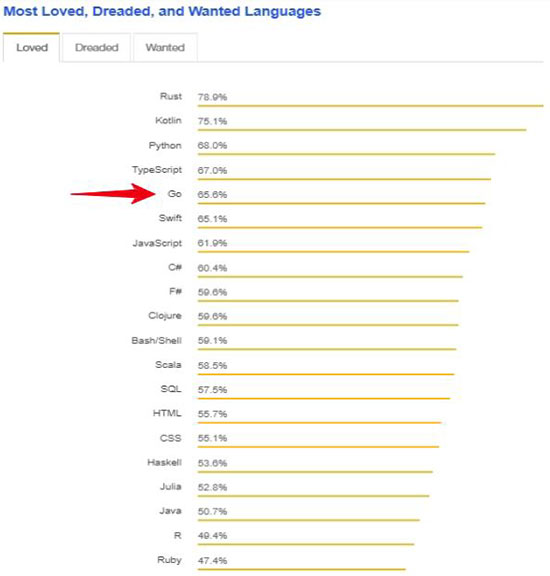 This speed advantage has made Go a critical component of cloud infrastructure. So, if you are planning to work in a serverless ecosystem, Go is the language for you. 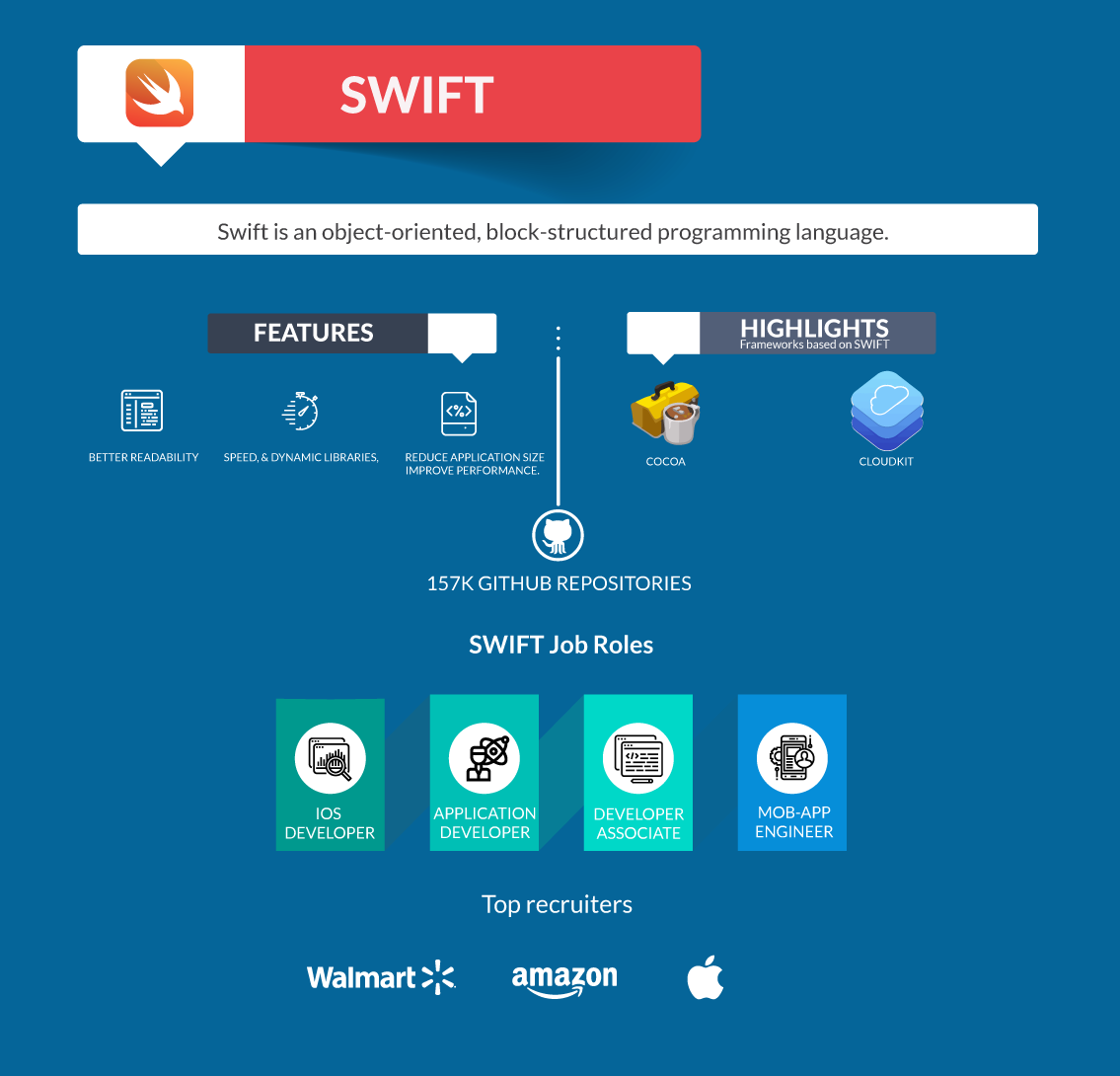 Swift is a general-purpose compiled programming language developed by Apple that offers developers a simple and cohesive syntax. It is deeply influenced by Python and Ruby that’s fast, secure, and easy-to-learn. Owning to its versatility and practical applications, Swift has replaced Objective-C as the main language for Apple-related applications.

Further, since Swift is promoted by Apple, its popularity and community support is increasing. In fact, a study of the top 110 apps on the app store showed that 42 percent of apps are already using Swift.

Coders with little or zero experience can use Swift Playgrounds to learn the language, experiment with complex codes, and work on native iOS and macOS apps. Swift is the premiere coding language that helps developers create iOS apps within a short time. The programming language opens several opportunities for new programmers, allowing them to make it big in the world of app development.

There is a giant market out there for iOS and you definitely want to be a part of it. If you are eyeing this burgeoning market, Swift is the language you should learn in 2020.

GitHub also published a chart of the most-used programming languages among its community, and there are precious few surprises there. The same stalwarts that dominate other popular-languages charts—including JavaScript, Python, Java, and PHP—continue to rule the GitHub ecosystem:

“This year, C# and Shell climbed the list,” the Octoverse report added. “And for the first time, Python outranked Java as the second most popular language on GitHub by repository contributors.” 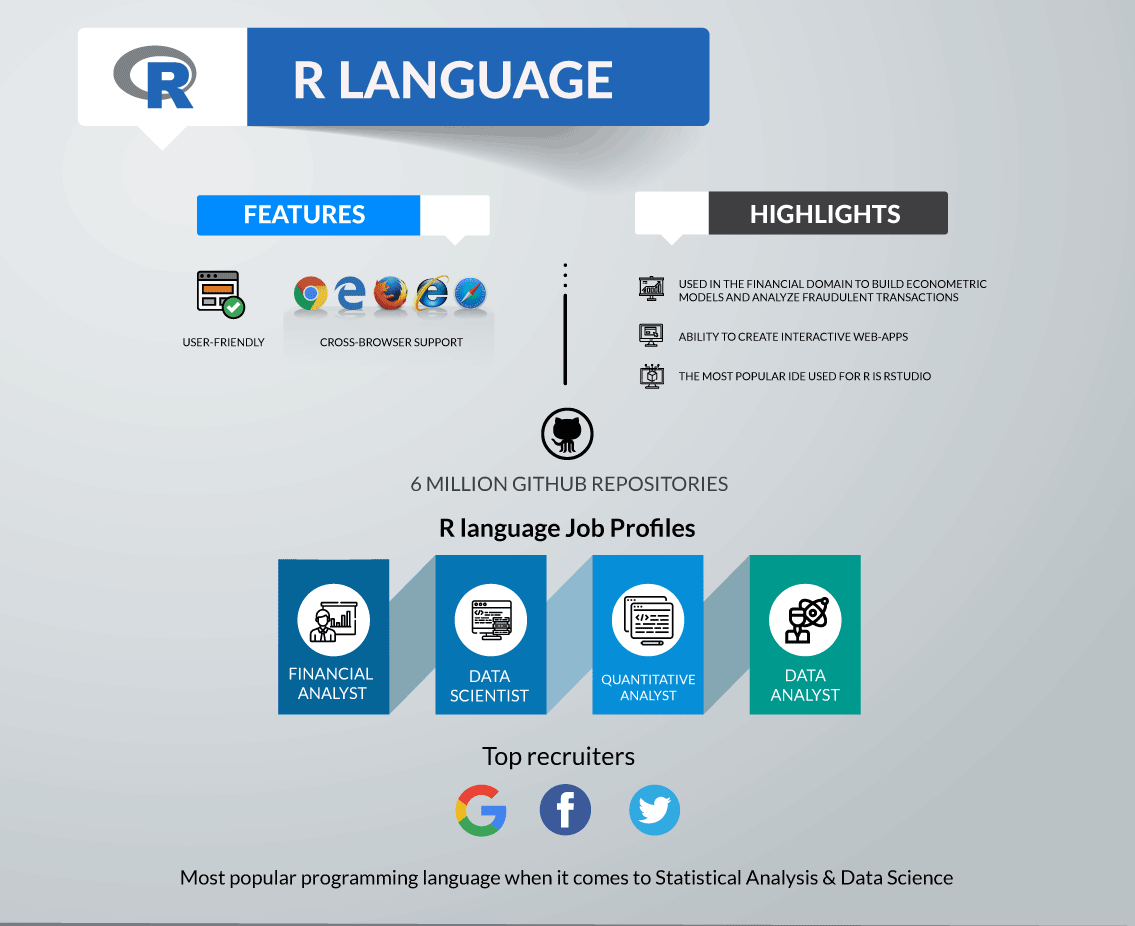 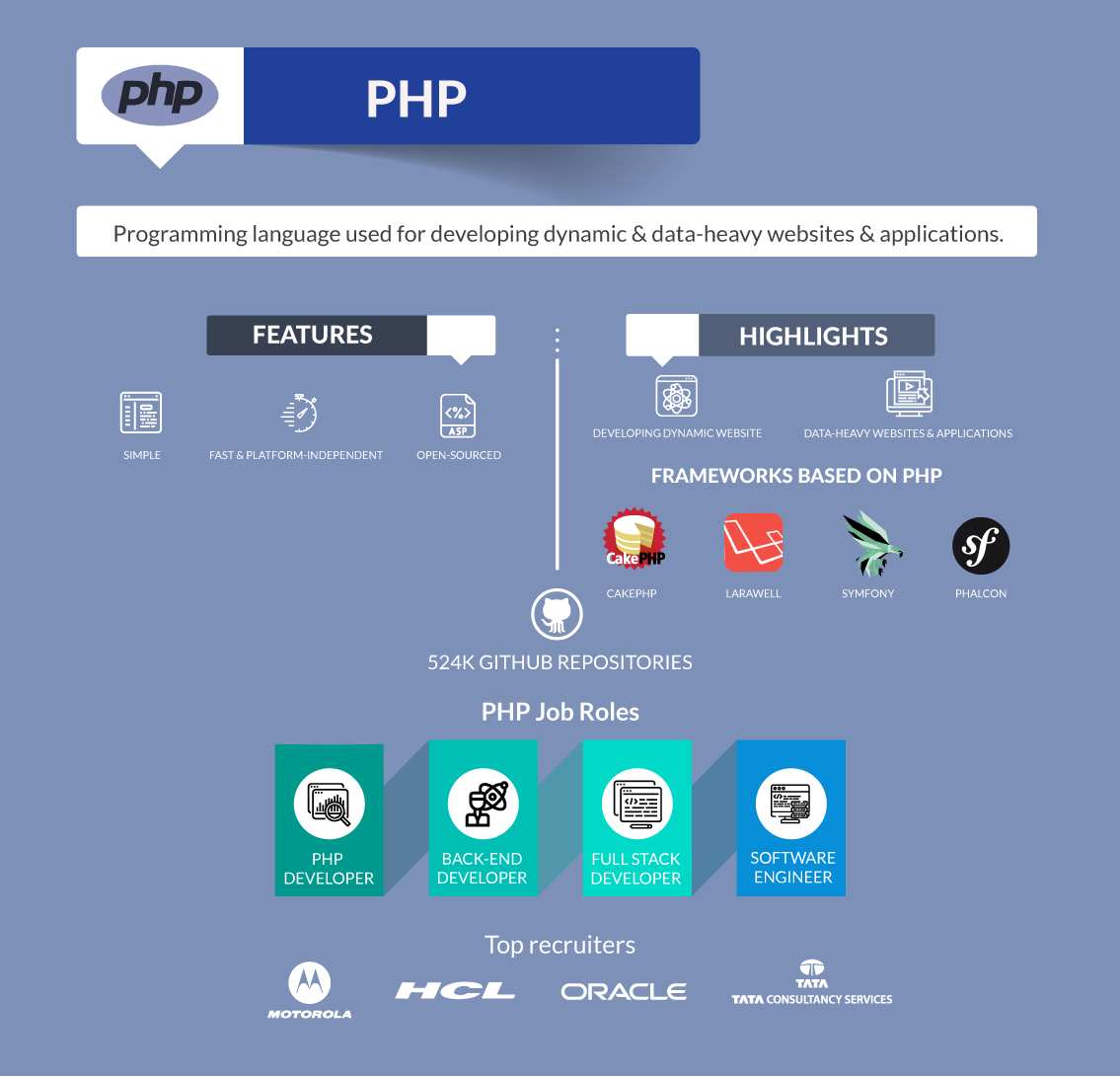 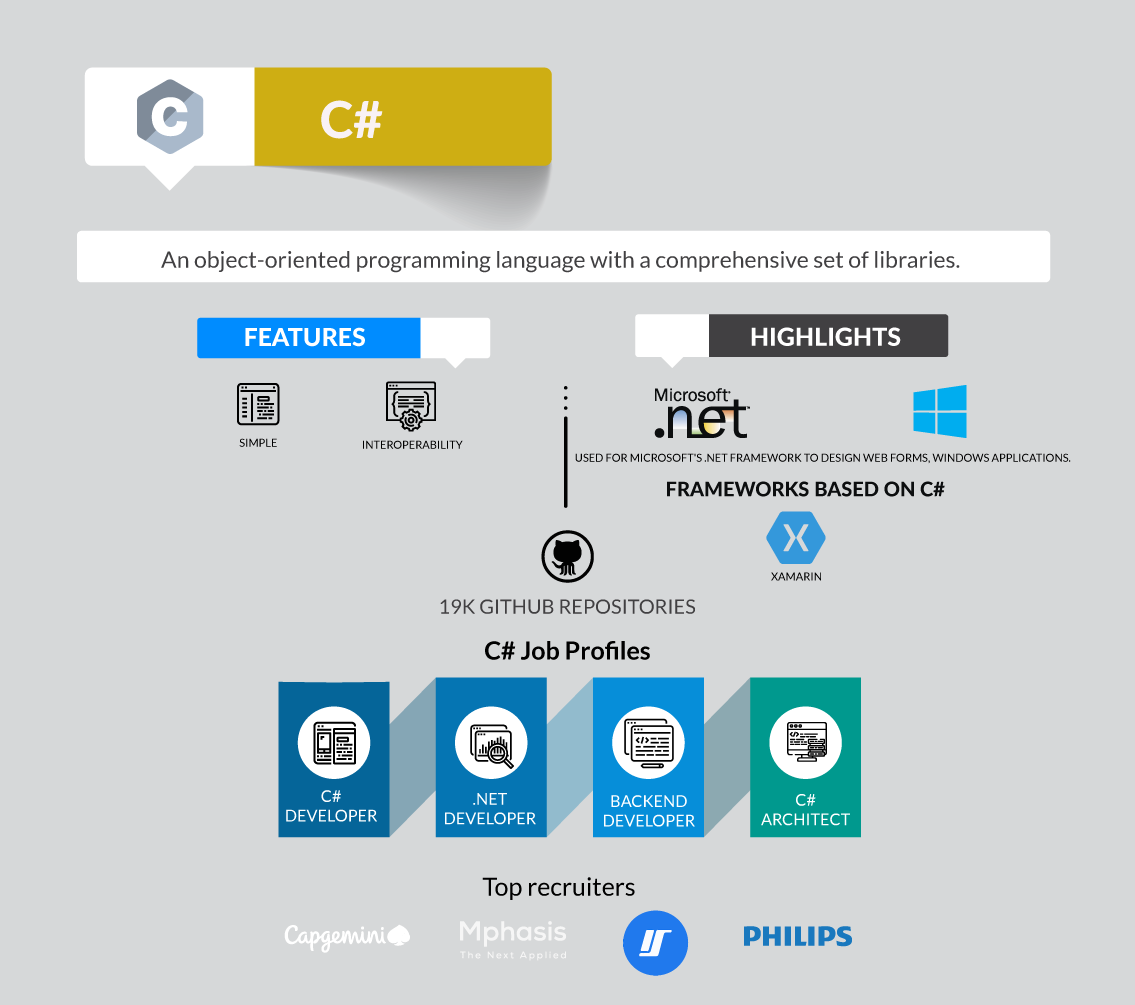 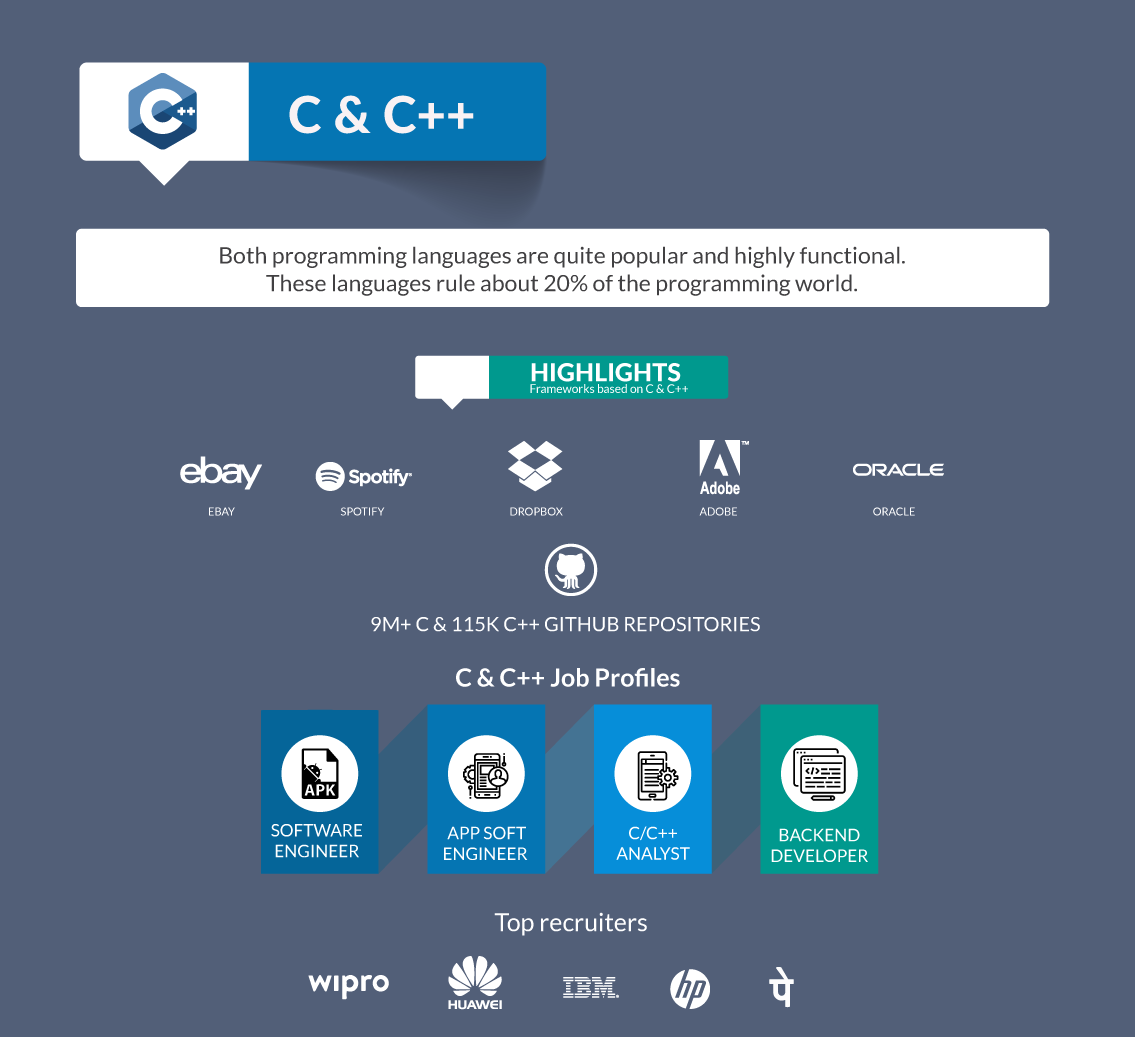